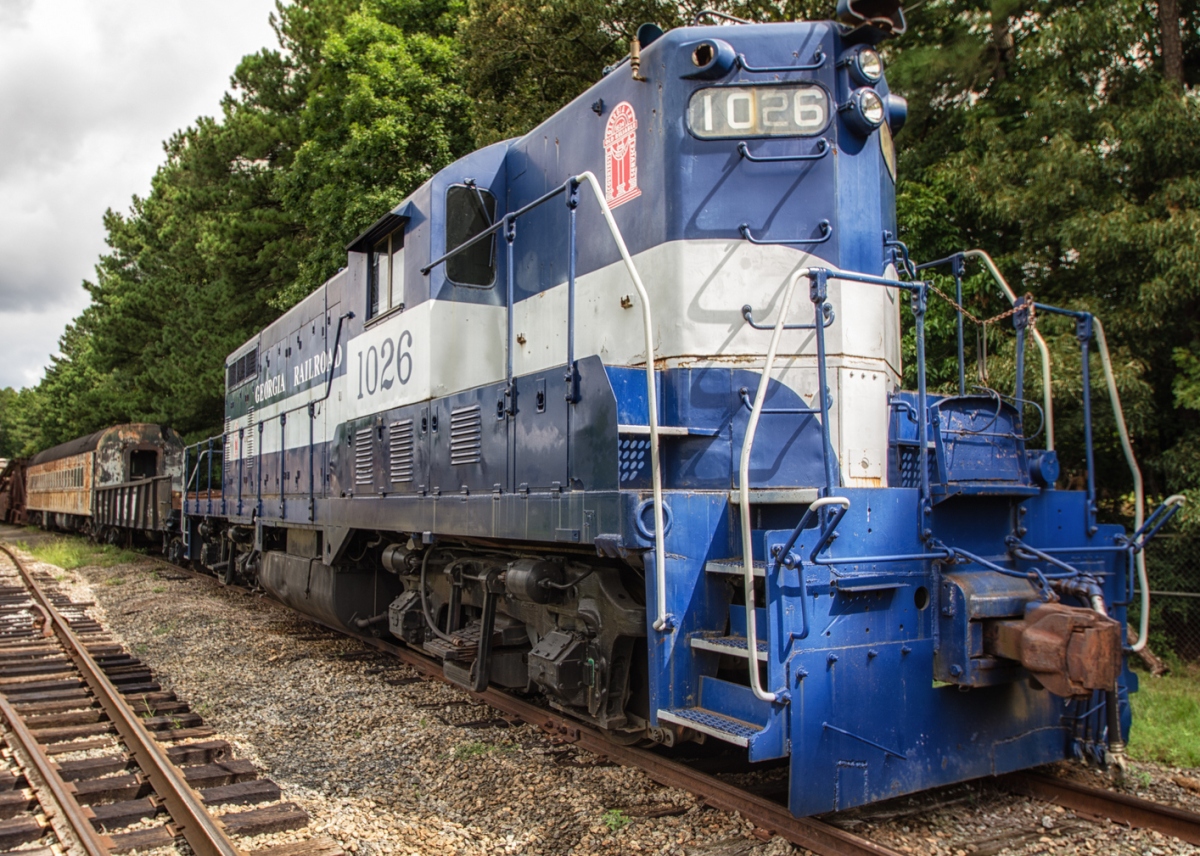 I found this image of one of the engines at the Southeastern Railway Museum which I hadn’t shared previously and thought I would put it up.  This was from a trip with the North Georgia Photography Club about a month ago.

The museum, which is located in Duluth, Georgia, has a fairly sizable collection of railroad engines, rolling stock, and other transportation equipment.  Below is their description of this engine:

1026 – GP7 Locomotive – Georgia Railroad
This locomotive was built in 1950 by EMD. It was acquired from the Tennessee Valley Railway Museum in 2004.
Status: Stored Serviceable 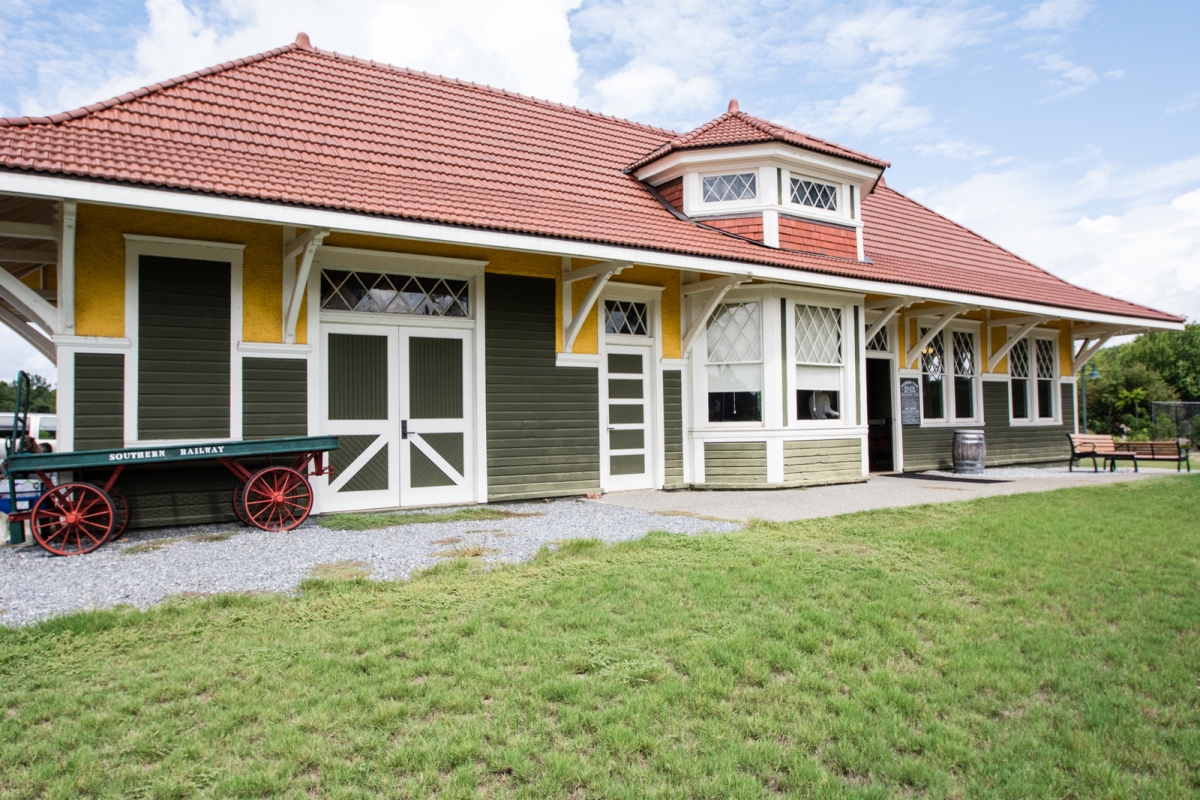 Preserving history is such a hit-or-miss thing.  There are so many buildings and other historic sites that are destroyed either on purpose or simply through neglect.  In the case of this building, there was quite a bit of effort to keep this piece of history in tact.

The Duluth Train Depot was originally opened in 1871 to serve the cotton trade that was active in this area about 30 miles Northeast of the city of Atlanta.  When first opened, there was no other rail service to this area and the depot played a major role in expanding economic activity here and connecting the city more conveniently to Atlanta.

The depot was operated by Southern Railway, part of today’s Norfolk Southern Corporation up until the 1950’s. The building was turned over to the City of Duluth and was idle until it was sold to a local developer.  The depot was moved twice before becoming part of the Southeastern Railway Museum in 2008.

The building was completely restored and re-opened to the public in 2011.  Although it is not in its original location, it now stands along part of the same rail line that it had served 145 years ago.  It took a lot of special attention to keep this historic building alive but, I think we lose too much when we let our past fall into ruin.

This is a great place to go absorb some feeling of a time gone by.

You too can bloom where you are planted 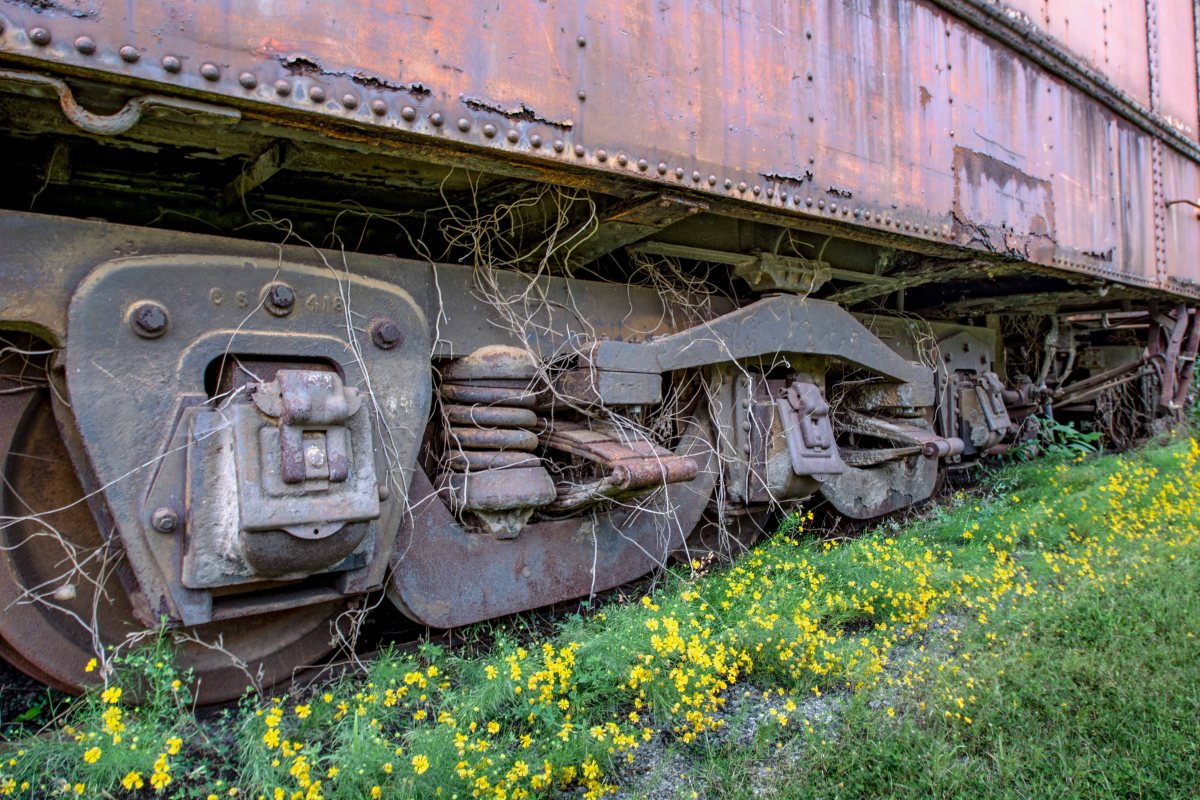 Flowers aren’t picky about where they grow.  They add color and beauty to any spot as long as there is some sun and some water they’re happy.

I liked the contrast here between the little yellow flowers growing wild and the heavy industrial components of the wheels and suspension of this rail car.  Soft and hard, decay and growth, side by side.  The world is full of these contrasts.  Some people find this hard to deal with and others find it interesting and beautiful.  I fall into the second group.

Hoping that you all can appreciate the variety of life and learn to bloom where you are planted!

Vintage rail cars have so much wonderful detail 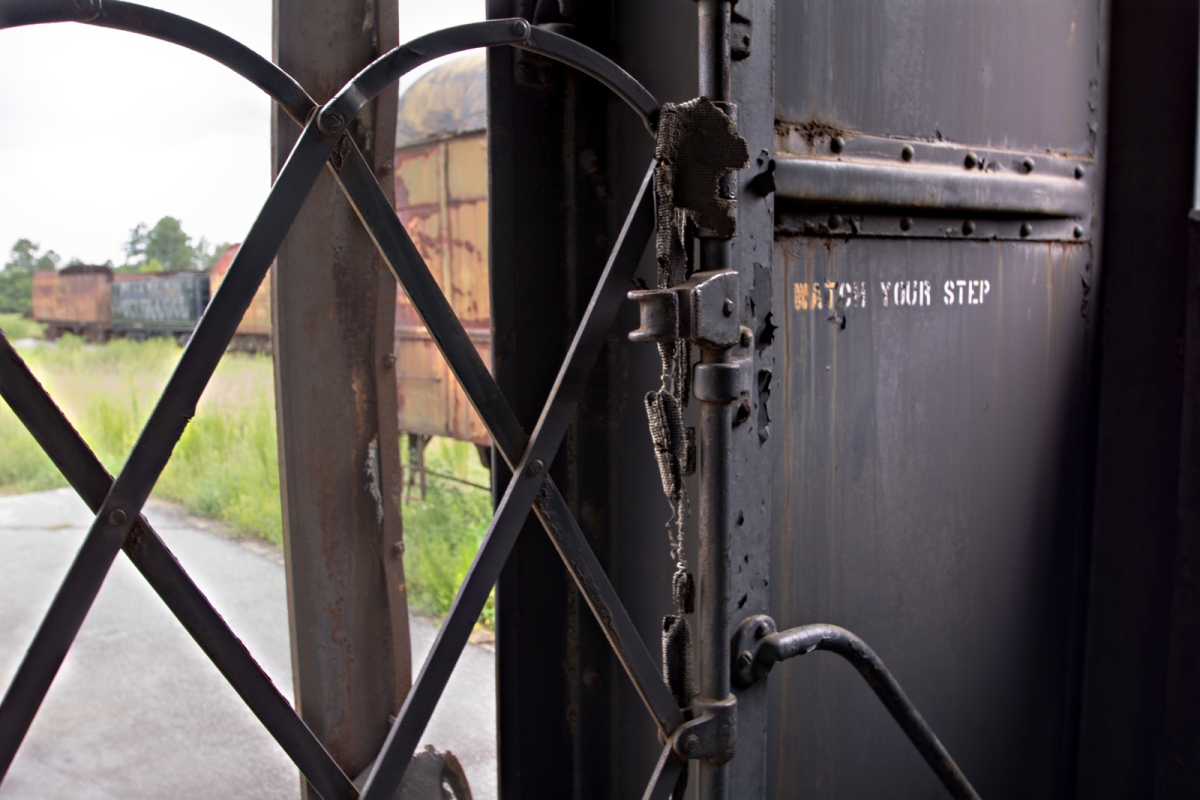 This was something that caught my eye at the Southeastern Railway Museum.  The detail of this gate and the WATCH YOUR STEP stencil on the wall of the car just called out, look at me!  With the grass in the yard and the other rail cars off in the distance it just seemed to me to be a combination of color, light and texture that I couldn’t pass up.

Sometimes, I am not sure what will interest others when I spot things like this.  You might not share my enthusiasm for the patterns and contrast in light but it made me smile.  Trying to please others is a continual exercise in self-abuse.  Somebody will always criticize and someone else will not like anything you do, no matter what.

If I was doing this as a profession, I would probably drive myself nuts.  As long as I enjoy what I’m doing and I am continuing to grow and learn to do better, that’s what makes me keep going.  So, if I like the outcome, at least one person is happy.

Junk or treasure? It depends on how you look at it. 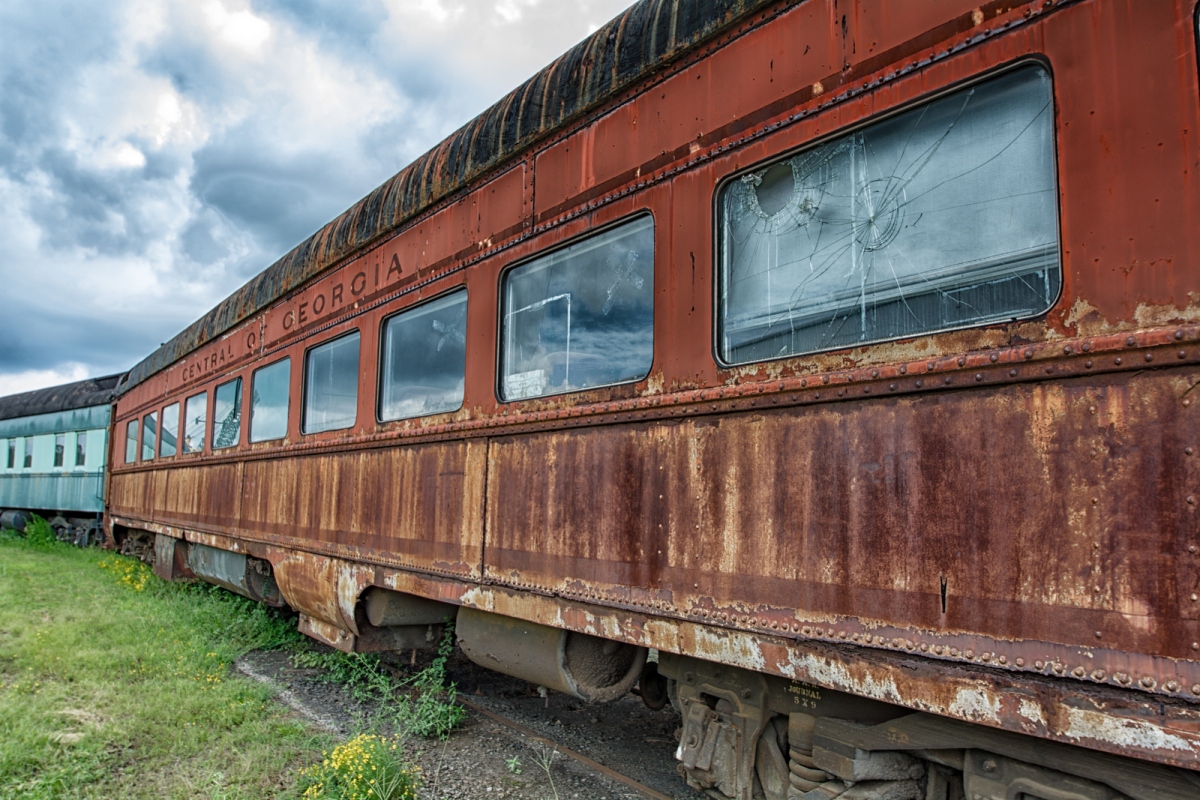 Another of the pieces of rusty rolling stock at the Southeastern Railway Museum.  This one I found very interesting as it displays so many marks of the past.  The broken window, the reflections of other rail cars, the faded “Central of Georgia” markings all give you something to look at and ponder.  The detail as well, with the rivets of the car body and the rusty streaks of color seem almost placed there piece by piece as a decoration.

It is amazing to see such marvelous scenery in what most people would consider junk.  Ah well, I can think of worse things to spend time contemplating. 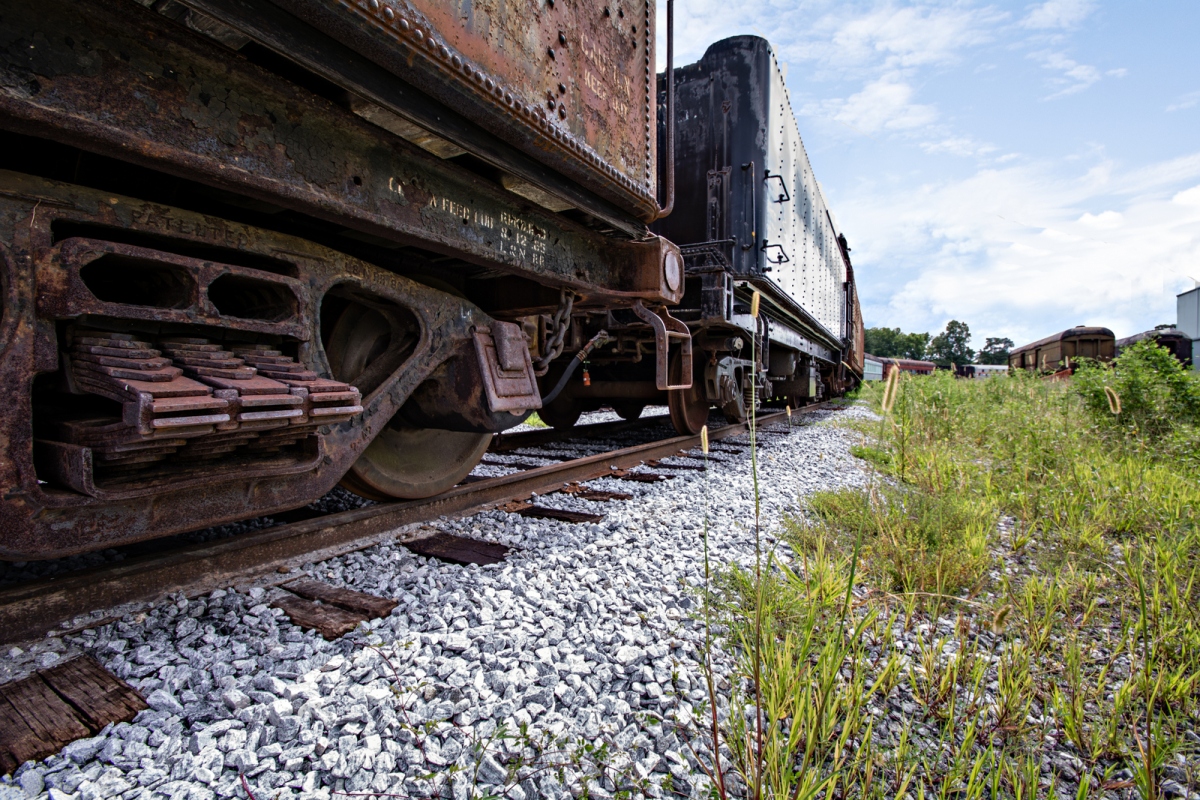 One of the really neat things about the Southeastern Railway Museum is all the cars that are out in the yard just sitting on the rails.  Being able to walk right up to the equipment and see the structural detail of the cars is amazing.  You don’t normally think about the mechanics of the wheels and couplings but seeing them up close gives you an appreciation for how complex they are.

This is also one of those environments where you can appreciate the beauty of rust.  We usually associate rust as a sign of things that are no longer useful or desirable.  At times though, the colors and textures that you see are so interesting.  It’s kind of like those images you see of old industrial buildings.  Even though these items are past their prime, you still get this haunting reminder of what they must have been like before.

Some of the equipment at the museum is in the process of being restored and some of it may never move beyond their current state of decay.  Whether these reminders of railway days gone by ever get polished and painted, they are all very interesting to see.

All aboard the Southeastern Railroad Museum train 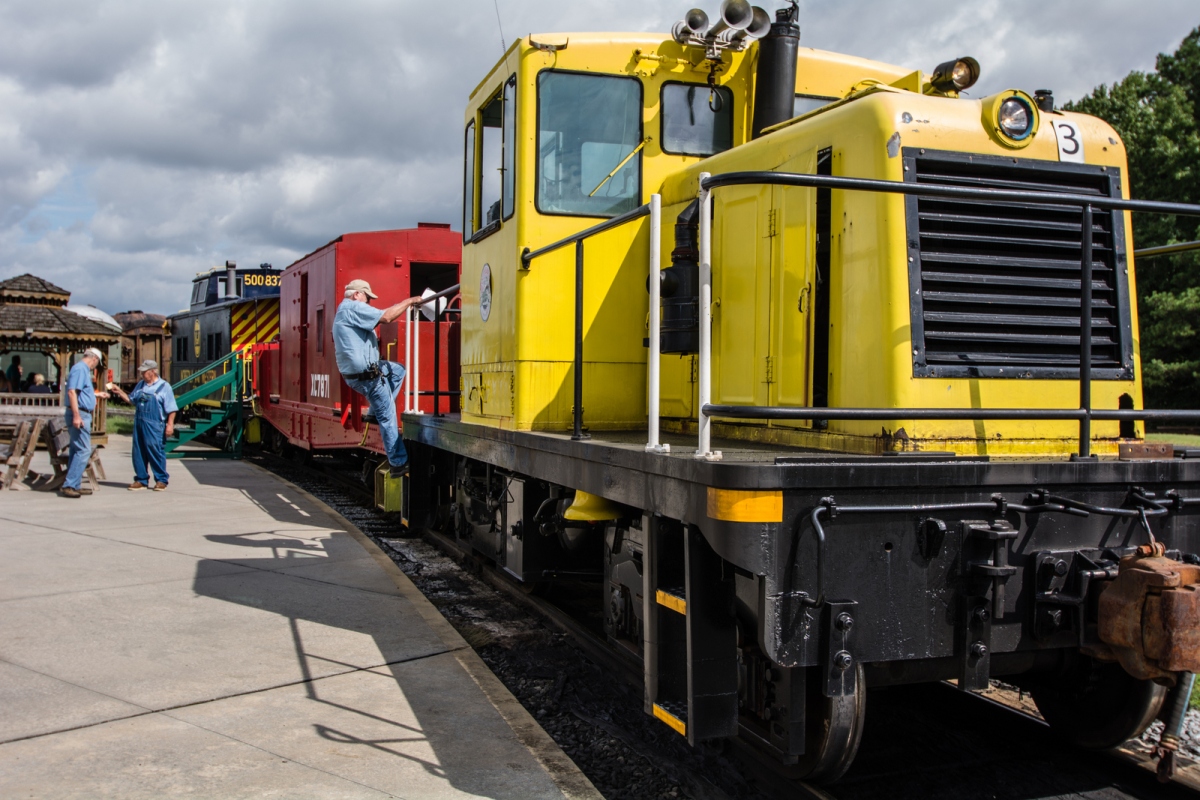 How can you have a real railroad experience without a ride on a train?  The Southeastern Railway Museum offers rides on an operating full-scale train so everyone in the family can get a little time feeling the rails beneath their feet.  Engine #3 (shown above) is  a 50 ton Diesel Switch Engine that was built in 1948 by General Electric. A couple of cars and a caboose provide room for riders to get a joy-ride around the yard. 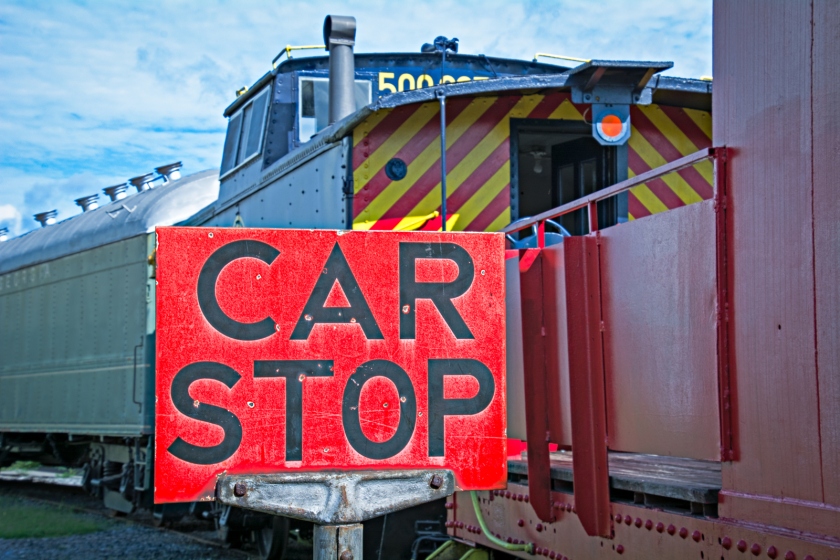 It is fun to watch as the engineer, conductor and the yard crew get everything ready for the “All aboard”.  People stand and wave to the other museum visitors as they depart on their ride.  Children of all ages seem to be thrilled by their time on the railroad. 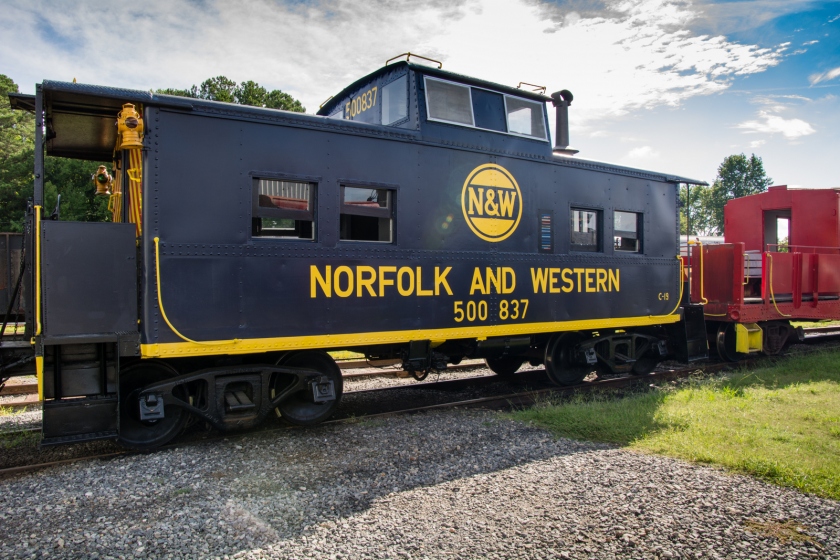 This is really a very interesting place and a great source of photo opportunities.  There are wonderful details, beautiful colors and rusty textures all around.  The museum is open Thursday thru Saturday with more going on during the summer than other times of the year.  Train rides usually start around 11:00 in the morning and have a several times before and after noon depending on the volume of visitors.  Check dates and times on the website before going but, it’s definitely worth the trip whenever you can go!