One of several acts from Luzia where the ceiling opened up to bring the rain was this duo of Cyr Wheel artists.  One was twirling in the air, the other spinning inside a big metal wheel while a downpour drenched them both.

How the performers do these amazing feats with all that water being dumped on them without drowning or slipping off the stage is beyond me!  It is also a very cool to see the water dripping and spraying all over.  A fantastic show.

On Sunday, we went to see the Cirque du Soliel show – Luzia which is now playing at Atlantic Station.  The show’s inspiration is Mexico and the title is a combination of the Spanish words for light (Luz) and rain (LLuvia) which are both prominenet in the show.

The spectacle is impressive in this production.  There are a number of large-scale animal puppets (similar to those used on Broadway for Lion King and War Horse) that are pretty amazing.  The image above shows the big, silver horse that appear several times along with the masked wrestler and the clown, an everpresent character in Cirque shows.

I was happy to see that the restrictions on photography have been relaxed here.  It was a bit confusing to determine what the rules were.  As long as you don’t use flash and you’re not trying to video the whole show, it’s pretty much OK.  I had someone tell me on the way in that I couldn’t use my camera at all during the show but then, at the opening of the show, they announced that photography was allowed.

In any case, I would recommend this show as it was very well done and amazing to watch.  The one thing I would warn people of was the contortionist.  This act is mind-blowing but also somewhat disturbing.  The guy bends totally in half, backwards and twists himself literally into a pretzel.  Made me kind of queazy. 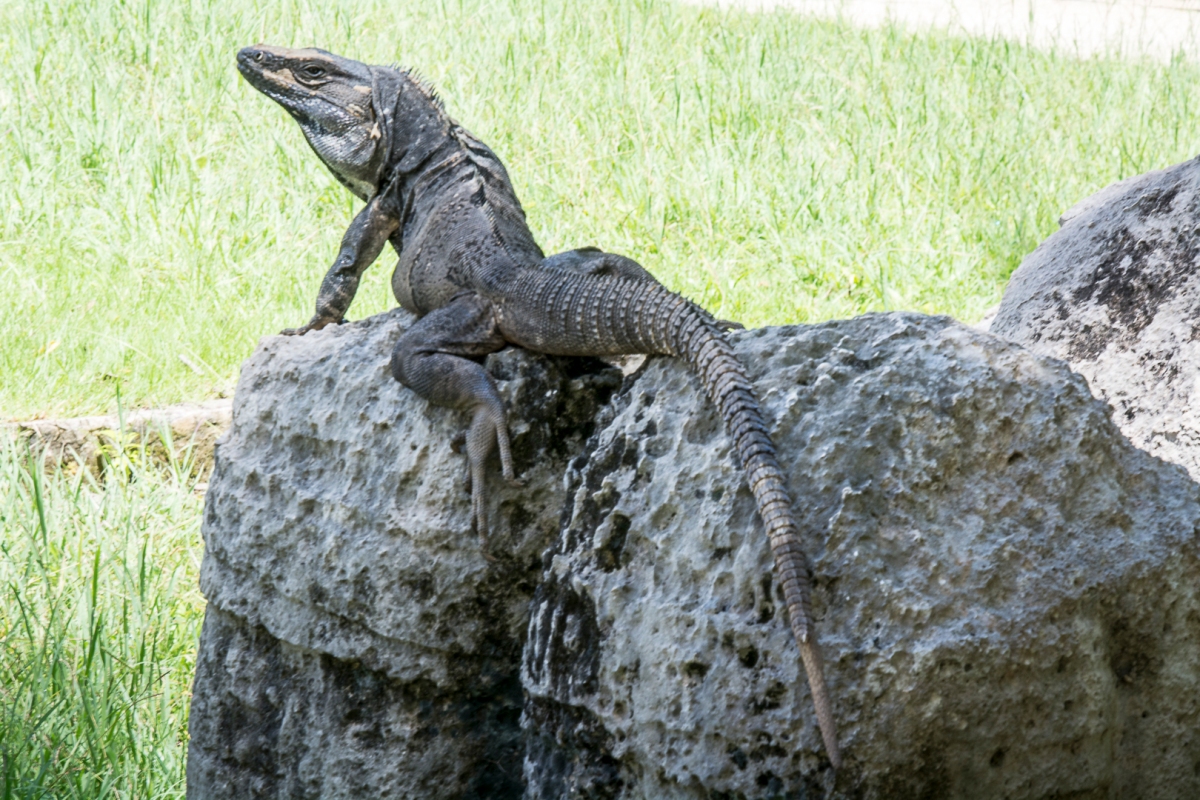 The structures of Chichén Itzá are covered with carvings of powerful wild animals.  Today, the ruins are also covered with local inhabitants like this iguana.  I can easily picture ancient Mayans looking at these miniature dinosaurs and imagining dragons or feathered serpents, perhaps?

If you don’t look closely, you could mistake this one for another carving.  Basking in the sun on a chac mool (sacrificial sculpture) the lizard blends in with the colors of the stone and seems not the least bit bothered by the tourists who wander about the site.  I guess they just get used to all these silly people being awed by this amazing history. 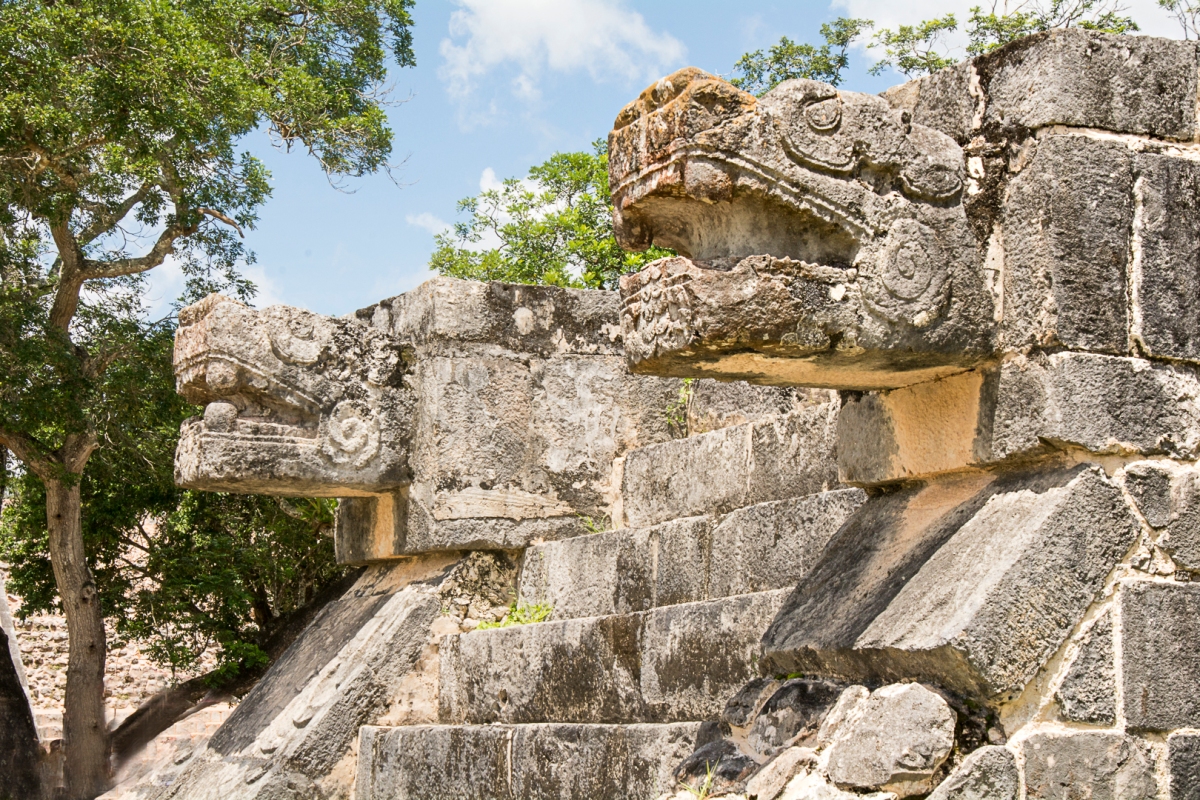 On the great Plaza, between El Castillo the main pyramid, and the Great Ball Court, are several smaller structures. The Platform of the Eagles and Jaguars and the Temple of Venus are two very similar structures with steps on each of the four sides and a flat platform at the top. The top of each staircase is flanked by images of the winged serpent, the God Kukulcán. 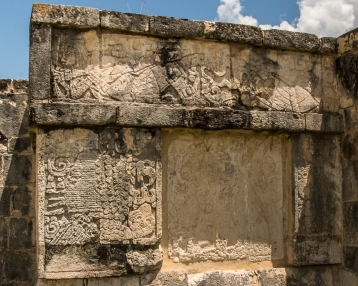 The walls of the Eagles and Jaguars platform are carved with Eagles and Jaguars gruesomely grasping human hearts.  The story here is that there were two groups of Toltec warriors responsible for capturing sacrificial victims. Eagle Knights, who attacked the enemy using bows and arrows and Jaguar Knights fought using clubs fitted with obsidian knives.

The platform was likely used for religious and ceremonial purposes and may have been a sacrificial site.

The Platform of Eagles and Jaguars
Chichén Itzá, Yucatan, Mexico 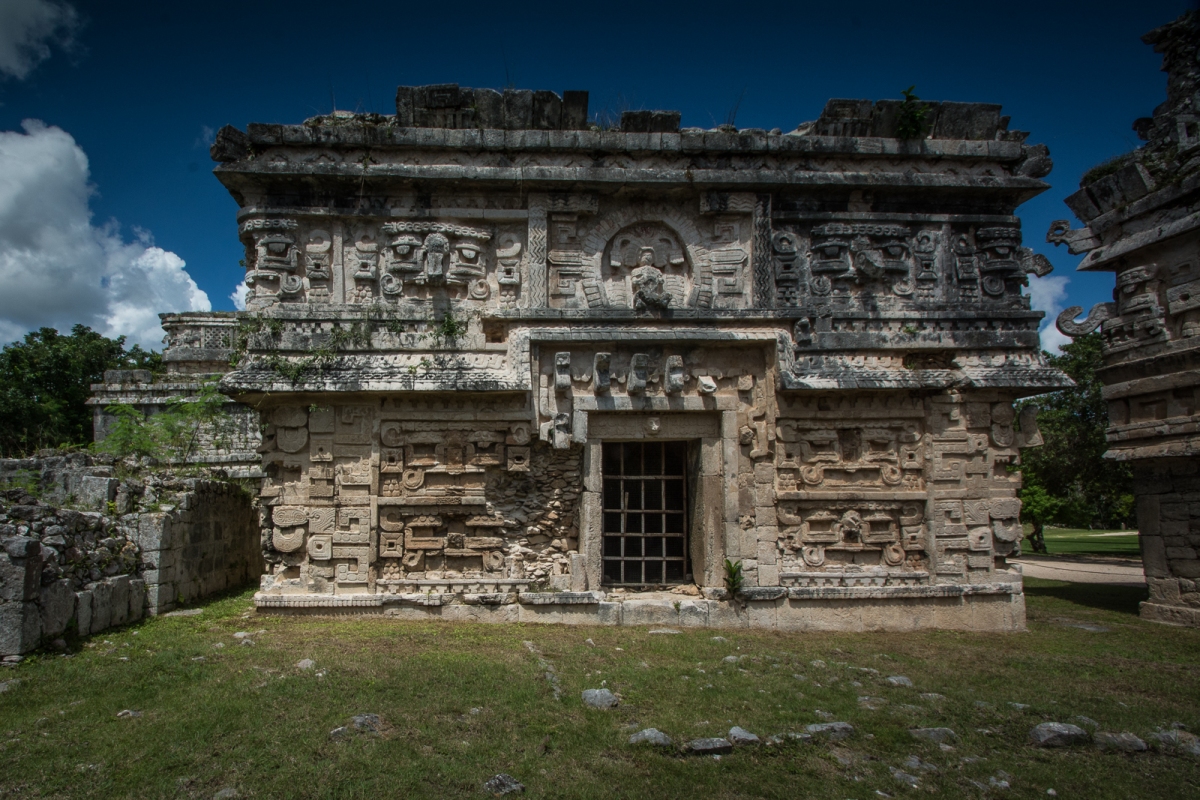 In Mayan culture, the number 13 was considered to be of special significance and many of the structures at Chichen Itza feature repetitions of images in this number.  This building, the largest of the Classical Period (600 – 950 AD) architecture is known as “The Nunnery”.  The early Spanish explorers gave it this name (Las Monjas) because the building has many doorways that reminded them of monastery cells.

This structure is actually not believed to be a temple but a royal palace.  The face of the building is covered with intricate carvings with a focus on the Rain God “Chac”.  The side entrance shown in this image  includes 13 images of Chac, 8 on the bottom level, 4 on the top and the whole side is a huge face with the door representing the mouth.

Hurricane Irma has given us some bonus cruise time while we wait for the storm to clear.   Last night, we made a move about 100 miles south from Cozumel to the port of Costa Maya, Mexico.

This port was built for the exclusive purpose of attracting cruise ships to stop along Mexico’s Mayan Riviera.  There is no major city here but it’s actually not a bad place to stop.  The port area is quite touristy but not over-run with people hawking cheap stuff at every corner like some other places.  Everything is pretty new and clean with a beach area, swimming pools and lots of little shops.

At the center of the shopping area, there is a tall pole where a demonstration is done on days when ships are in port.  This is described as a Mayan rain ritual which ties in with  the local history but the ceremony, known as  the Danza de los Voladores, is a centuries old tradition practiced by numerous indigenous peoples of Mexico, Guatemala, Nicaragua and El Salvador.

The ceremony involves a dance of 5 participants with music and chanting followed by a climb up a 30 meter pole.  Once the “voladores” have climbed to the top, four of them tie themselves to long ropes and launch into the air, spinning around the pole 13 times (a magical number to the Mayans) until they reach the ground.  In this demonstration, there are only 4 flyers but the original includes a fifth person who stays standing atop the pole while the others spin their way down.

This was a neat display which was only diminished by the fact that it took a fair amount of time to complete which made it hard to watch looking up all that time with the hot, Mexican sun beating down on you.  I am glad we got to see this as it added to our Mayan history lesson.

This column is believed to represent the four seasons of the year – one on each side. The images on the closest side show a representation of the rain god – Chac shown with the nose of an elephant.  Chac is one of the most frequent images that we saw throughout Chichen Itza.

Obviously, rain was extremely important to the Maya culture.  I assume this was primarily because the Yucatan peninsula is very hot and they would have been highly dependent on rain for drinking water and agricultural irrigation.  On our visit, we have been more concerned with the over-abundance of rain related to hurricane Irma.  Either way, it is obvious that predicting the weather has been a chief concern of people for a very long time and we still don’t quite have it figured out.

December 12th is the Feast Day of Our Lady of Guadalupe in the Catholic Church.  This feast is one of the most celebrated religious days in Latin American culture as it remembers the appearance of the Virgin Mary in Mexico.  The celebration begins on the night of the 11th and continues through the night and all day long on the 12th.  At our church, the feast is marked with re-enactments of the apparition, displays of Aztec dance, serenades and homages to the Virgin Mary and of course, mass in Spanish and English.

The story of the Virgin of Guadalupe is unique in that is the only apparition where Our
Lady left a miraculous image of herself unmade by human hands.  Second, it is the only universally venerated Madonna and Child image where Our Lady appears pregnant instead of holding the Infant Jesus.

Reproductions of the image of the Virgin of Guadalupe are on display for the feast in many Catholic Churches including the one I attend.

The story of Our Lady of Guadalupe
In the winter of 1531, a poor, 57-year-old Aztec Indian living five miles outside of Mexico City encountered a miraculous happening on his way to morning Mass. First he heard strange music coming from Tepeyac Hill, and then he heard a woman’s voice calling his name. Juan Diego climbed the hill and encountered a young woman, appearing to be of his own people in physical appearance and dress. The woman identified herself as the Virgin Mary, and told Juan Diego to ask the bishop of Mexico City to build a church on the hill to assist in the conversion of the nation and be a source of consolation to the people.

Juan Diego obeyed the request, but the bishop was skeptical regarding the message, even though he perceived that Juan was a humble, and well-meaning Catholic. Juan reported the bishop’s doubt to Our Lady at Tepeyac Hill, and she asked him to return to the bishop once again, bearing the same message. The bishop once again heard the story, and told Juan Diego to ask Our Lady for a sign that it was indeed herself that wished for the church to be built.

When he returned to the hill, Mary gave Juan Diego such a sign. Miraculously, roses appeared on the hill in the middle of winter, and Juan gathered them in his tilma, or cloak. Our Lady arranged the roses in his tilma with her own hands, and Juan returned to the bishop’s presence. When Juan released the tilma, allowing the flowers to fall to the floor, it was revealed that a miraculous image of Our Lady had imprinted itself on his tilma.

The bishop immediately fell to his knees, and came to believe in Juan Diego’s message. A church was built on the spot of the apparition, as Mary had requested, and 8 million people converted to Catholicism in a short period of time upon hearing of or viewing the miraculous image of Our Lady.

The tilma of Juan Diego has been the subject of much modern research. The tilma, woven out of coarse cactus fiber, should have disintegrated after 20 years, but although over 500 years have passed the tilma is still in perfect condition. The pupils of Mary in the picture reflect the Indians and clergy present at the time of the first revelation of the image. No paint was used, and chemical analysis has not been able to identify the color imprint. Additionally, studies have revealed that the stars on Mary’s mantle match exactly what a Mexican would have seen in the sky in December of 1531.

Here’s one more macro shot of money of the world.  Again, there is a wide variety of styles and designs as well as different materials that money is made from.  This mix includes Asian, European and South American coins on a bill from Jamaica.  I will move on to  a new subject tomorrow.  I promise! 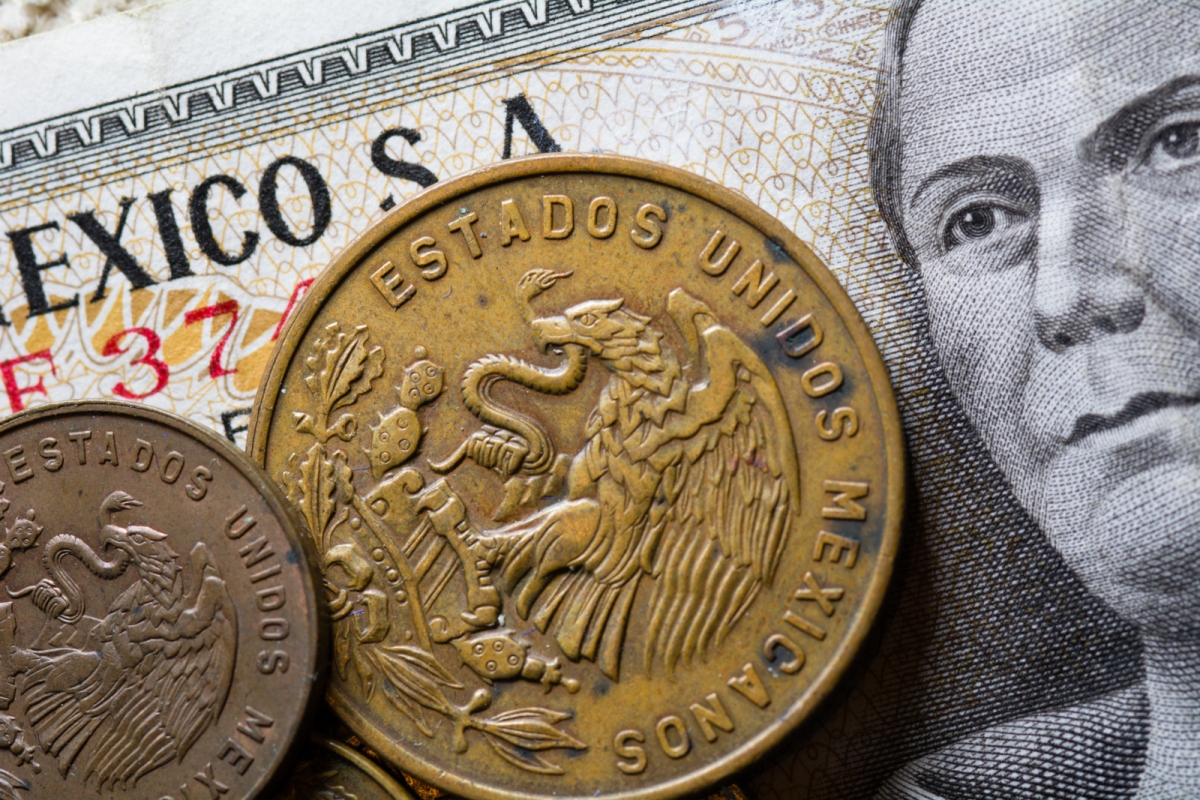 OK, so the country has elected Donald Trump to be our new president.  I guess we need to start collecting those pesos to pay for the wall between us and Mexico?  Hopefully, that was just campaign bluster and it will all settle back into Washington gridlock soon.  I can’t imagine what would happen if all the crazy ideas suddenly became reality.

The good news is, we don’t have to listen to those horrible campaign ads any more.  The bad news is, we’re in for uncertain times.  I suppose that would have been true either way but it does not make me very comfortable.  I pray that we can find the wisdom and compassion to make America great by being the most caring nation not the most greedy.

In the mean time, I will keep focusing on the little details that make life interesting.